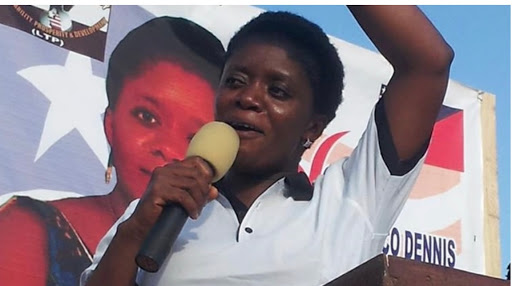 Montserrado County District#4 Representative  Rustonlyn Suacoco Dennis is contesting for the Deputy Speakership of the 54th National Legislature of Liberia.

According to Ms. Dennis, the details of the competition should be should be restricted to the 73 lawmakers and not the public.

‘It will do me no good in a sense that they are not part of the electorates so if the rumor is truth then let me just accentuate… then let me focus on the 73 and forget the public,” she told state radio LBS on Friday.

Madam Dennis said her ambition to contest the Deputy Speakership of the 54th National Legislature is to help tackle the many challenges confronting the Liberian people and the parliament.

“Like I always said to my colleagues, my being in the legislature, I just said gave me the opportunity to serve because this is what we need new ideas, we need new brains and we need innovation in the house of parliament. It all doesn’t have to come from the national budget,” she said.

The 28 year-old representative-elect said one of the best ways forward to adequately work in the interest of the Liberian people is “engaging the outside world and lobbying with friends for support”.

She said this would help boost the Liberian economy instead of heavily depending only on the country’s budget.

Dennis said her major priorities are empowerment of local dwellers and community development.

“I want to effect more local empowerment among community dwellers; I want to carry on significant community development. District four is a very large district and as of now we do not have district town hall, we do not have administrative building, we do not have lot of public services, that I felt that our lawmaker was not in our interest because throughout the campaign when we want to have meeting and it is raining our meeting gets distrusted.