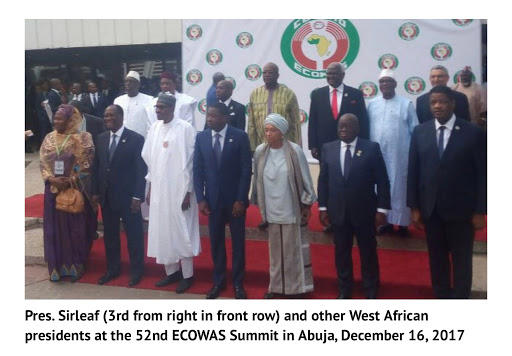 Leaders of the Economic Community of West African States (ECOWAS) paid homage to Her Excellency, President Ellen Johnson Sirleaf as she attended her last summit of the regional body as President of Liberia.

A release from the Liberian Embassy in Abuja says the President Sirleaf special recognition took place during the 52nd Ordinary Session of the Authority of Heads of State and Government of ECOWAS held on Saturday, December 16, 2017 in Abuja, Nigeria.

The Chairperson of ECOWAS and President of the Republic of Togo, His Excellency Faure Essonzimna Gnassingbe, devoted a significant portion of his opening remarks to the honor of President Sirleaf.

“I would like to take the opportunity, ladies and gentlemen, to seize this exceptional opportunity to pay a final tribute to the one we all know as the ‘Iron Lady’, Madam Ellen Johnson Sirleaf, President of the Republic of Liberia”, the release quotes the Chairperson of ECOWAS as saying.

President Gnassingbe, in his opening remarks, continued, “Your Excellency Madam President, at the moment when you are about to pass the witness in your capacity as President of the Republic of Liberia, allow me to address you our warm felicitations and to pay you a deserving homage for your determination to the cause of the economic integration and peace, and for the leadership you have shown during your tenure as the first woman president of Africa, the first female Chair of ECOWAS and the Nobel Peace Prize winner. You have worthily represented West Africa and displayed exceptional strength and courage to lead the Liberian people in peace and cohesion throughout your tenure. You have represented West Africa with dignity and exceptional strength and courage to keep the Liberian people in peace and harmony throughout your tenure.”

According to the release, the Togolese Leader said his Liberian counterpart has guided the West African Region and that her influence has spread across their space, through social, political and economic challenges, including the end of the Ebola virus epidemic, recognized as a world threat.

“To render this homage to her, I would like, very respectfully, to proffer if you agree, Your Excellencies, the Heads of State of Government, that we should rise to offer you an ovation which she deserves in more than one way for her greatness and recognize all her achievements, sources of our pride”, he added, as the rest of the West African leaders and the entire audience rose in applause.

Meanwhile, regional leaders and guests have congratulated President Sirleaf and the Liberian people for respecting the rule of law throughout the country’s electoral process.

The Chairperson of ECOWAS, Togolese President Gnassingbe, in his opening remarks at the Summit, added, “Allow me to address here my congratulations to Her Excellency, Madam Ellen Johnson Sirleaf of Liberia and to all the political actors for the salutary decision of the Supreme Court of December 7, 2017 to proceed to the second round of the presidential elections, after having managed to smooth out the protest of the first round”.

For his part, President Muhammadu Buhari of Nigeria, in his welcome remarks, said, “I salute the people of Liberia for the manner in which they conducted themselves during and in the aftermath of the just concluded general elections.”

The release further quotes the Nigerian Leader who was the host of the Summit, as adding that it is his fervent hope that the same attitude prevails in the coming run-off election scheduled to hold on 26 December.

President Buhari hopes that a new president is inaugurated in January, 2018, as per the provision of the country’s Constitution, according to the release: “My dear sister, Your Excellency Sirleaf-Johnson, we appreciate the leadership you demonstrated in this electoral process.”

According to the Nigerian Leader, Liberia’s peaceful conduct of the elections was in accordance with the “ECOWAS Protocol on Democracy and Good Governance”, adopted in 2001 by the Authority of the Heads of State and Government.

Others were the Liberian Ambassador to Nigeria, Professor Al-Hassan Conteh and Montserrado County Representative Honorable Josephine Francis, the release concludes.