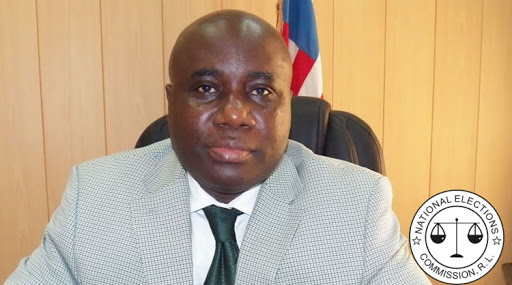 With barely two (2) weeks to Liberia’s run-off election, scores of citizens on Thursday morning converged at the headquarters of the national Elections Commission in Monrovia holding placards and demanding the resignation of Cllr. Jerome Korkoyah. It can be recalled that the Supreme Court of Liberia on December 7, 2017 ruled that the NEC clean up its Final Registry Roll (FRR) and set a date for the run-off election. Days after the run-off election was rescheduled for December 26, 2017, Liberians have been requesting the resignation of Cllr. Korkoyah as chairman of the country’s electoral body. In an interview with newsmen in Monrovia, Miata Fahbulleh, noted that if the election must be transparent, free and fair, Cllr. Korkoyah should recuse himself and give way for a credible run-off election. Chairman Korkoyah was appointed by President Sirleaf in 2012 to head the commission. He has since conducted over two by-elections and a special senatorial election on December 14, 2014.

In a related development, a steward of the ruling Unity Party, George Kailando, has embarked on a vigorous media campaign demanding the resignation of the current NEC boss. He has also vowed that he will not rest till chairman Korkoyah resigns.

Meanwhile, the Liberia National police have secured the headquarters of the NEC in Monrovia and at the same called on citizens to retire from the perimeter of the NEC and the principal streets of Monrovia.