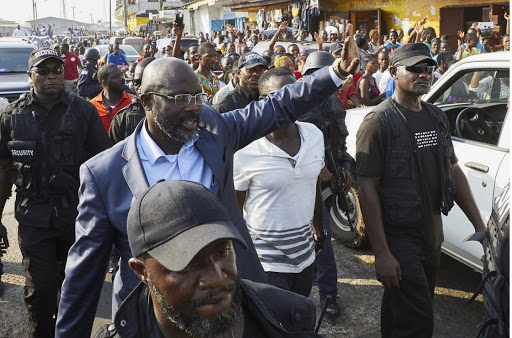 Liberia’s Supreme Court told the electoral commission to proceed with organizing the final round of presidential elections that was initially scheduled Nov. 7 but put on hold to probe allegations of fraud during the first round.

The runoff should go ahead, Justice Philip Banks said in the ruling Thursday in the capital, Monrovia. The ruling ends weeks of uncertainty over the electoral process in a country that emerged from a protracted civil war in 2003. The runoff will be contested by former soccer star George Weah of the Coalition for Democratic Change and Vice President Joseph Boakai of the ruling Unity Party. Weah got 38 percent of votes in the first round on Oct. 10, while Boakai came second with 29 percent of ballots cast.

The Supreme Court on Nov. 1 halted preparations for the second round to hear complaints lodged by presidential candidate Charles Brumskine, who came third as leader of the Liberty Party. Brumskine was joined by the Unity Party in his call for a rerun of the election, saying it was marred by fraud and irregularities. Brumskine also questioned the professionalism of Liberia’s electoral commission, demanding its commissioners be fired.

While irregularities did occur at some voting stations, the complainants didn’t prove that similar incidents took place throughout the country, Banks said.

“For there to be such a massive turnaround in the entire electoral process, the appellants are under a legal obligation to show that these activities occurred not just at a few isolated centers, but that they occurred at most, or all of the polling places,” he said.

For the runoff to proceed, the National Elections Commission needs to clean up the voters roll by removing multiple names of identification numbers and ensure that no unregistered person is allowed to vote, according to the judgment.

President Ellen Johnson Sirleaf is due to step down on Jan. 18 after completing two five-year mandates.