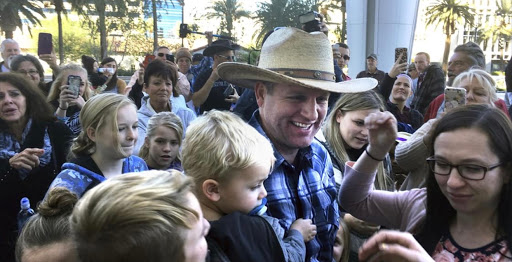 A federal judge has declared a mistrial in the case against Nevada rancher Cliven Bundy, saying U.S. prosecutors willfully withheld critical and "potentially exculpatory" evidence from the defense.

Judge Gloria Navarro dismissed jurors Wednesday, several weeks after the trial began against Bundy, his sons Ammon and Ryan Bundy, and militia member Ryan Payne, who were accused of leading an armed standoff with federal land agents in 2014.

Navarro cited five key pieces of information that prosecutors did not disclose: records about surveillance and snipers at the Bundy Ranch; unredacted FBI logs about activity at the ranch in the days around the standoff; threat assessments about the Bundys dating to 2012; and internal affairs reports about the BLM.

Navarro methodically laid out her reasoning for about an hour, citing legal standards and case law, before delivering her ruling.

She said the evidence that was withheld could have been favorable to the accused and could have affected the outcome of the case.

Navarro stopped short of dismissing charges against the four men. It is unclear whether the case will be retried because Navarro did not rule whether the mistrial was with or without prejudice.

She has set another hearing for January and has tentatively scheduled a new trial to begin Feb. 26.

Navarro suspended the trial two weeks ago and warned of a potential mistrial after prosecutors for the first time disclosed several documents that appeared to support defense claims about the government's use of video surveillance and sniper teams during the standoff.

Prosecutors have long maintained the FBI was not involved in the standoff and that no video surveillance or sniper teams were used. They charged defendants with making false claims about snipers and videos to incite militia in the runup to the standoff.

Documents turned over by the prosecution after the start of the trial indicated the FBI played an active role in the standoff and that surveillance cameras and armed tactical teams were positioned around the Bundy Ranch.

Defense lawyers filed motions to dismiss the case, arguing the new documents provided critical evidence that would have allowed them to challenge the government's charges, impeach government witnesses and lay the foundation for self-defense claims.

In a motion Monday, acting Nevada U.S. Attorney Steven Myhre accused the defense of a "thinly veiled attempt" to nullify any verdict by alleging the federal law-enforcement officers instigated the standoff.

Myhre urged the judge to reject self-defense claims, saying the law doesn't allow the defendants to claim the government provoked them into taking up arms against law-enforcement officers.

For decades, the Bureau of Land Management ordered Cliven Bundy to remove his cattle from federal lands and in 2014 obtained a court order to seize his cattle as payment for more than $1 million in unpaid grazing fees.

The Bundys launched a social-media rallying cry. Hundreds of supporters, including members of several militia groups, converged on the Bundy Ranch. Federal agents abandoned the roundup, saying they were outgunned and in fear for their lives.

Last year, the government charged 19 people with conspiracy, assault, extortion and weapons violations for their roles in the standoff. Two men took plea deals. Trials for the remaining 17 defendants were broken into three tiers based on their alleged levels of culpability.

Bundy has maintained there was no conspiracy and that supporters were staging a peaceful protest and exercising their constitutional rights to bear arms.

For many Americans, images of the four-day standoff in a dusty wash below Interstate 15 about 70 miles northeast of Las Vegas were shocking. Hundreds of protesters, ranchers and militia members took armed positions around federal law-enforcement officers, some lying prone on freeway overpasses and sighting down long rifles.

But making a solid case against Bundy and his supporters has so far eluded prosecutors. Two federal juries in Las Vegas have rejected conspiracy claims against six defendants in earlier trials.

A jury in April deadlocked on charges against four of the first six defendants. It convicted Gregory Burleson of Arizona and Todd Engel of Idaho on weapons and obstruction charges but dismissed all of the conspiracy charges.

The government launched its retrial of the four defendants in July. But a second federal jury did not return any guilty verdicts after four days of deliberation.

Richard Lovelien of Oklahoma and Steven Stewart of Idaho were acquitted on all counts and walked out of court in August free after spending more than a year in prison.

Eric Parker and O. Scott Drexler were acquitted on most charges, but jurors deadlocked on a few weapons charges. Rather than face a third trial, both pleaded guilty to a misdemeanor charge of obstructing a court order.