George Weah: First Ever World Footballer Of The Year To Be Elected President 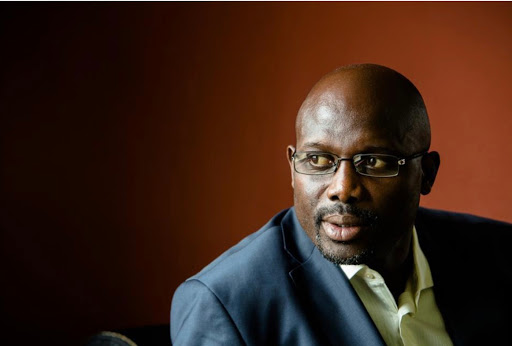 George Manneh Weah could dribble, sprint and shoot. He also possessed a good leap to power headers past goalkeepers. But he has scored his best ever goal by winning the Liberian presidential election following results announced Thursday evening.

Weah is not your ordinary African footballer, who just wanted to play football to escape the harsh reality of poverty and his childhood. He dreamed he could help his country and he initially did through his prowess on the football pitch. But he is about to be handed the keys to the presidential mansion, where he can make all those differences he had always dreamed about.

But right now, the 51-year-old has the opportunity to score political goals 14 years after retiring from scoring football goals!

Born October 1, 1966, Weah started his footballing career in Liberia. The current Arsenal of England coach, Arsene Wenger, brought him to Europe when he signed for Monaco in 1988. He moved to French giant PSG in 1992 long before Arab money mad the club the power house it is now. He won the French League in 1994 and became the top scorer of the 1994–95 UEFA Champions League. In 1995, he signed for Italian giants AC Milan, after they had lost the Champions League final of that year to Ajax, where he spent four successful seasons, and won the Italian Serie A twice. He moved to England towards the end of his career and had spells at Chelsea and Manchester City, before returning to France to play for Marseille in 2001. He subsequently ended his career with Al-Jazira in the UAE 2003. At international level, he represented Liberia at the African Cup of Nations on two occasions.

Throughout his career, Weah proved he was not the ordinary footballer. He is still the one and only player ever to hold the African, European and World diadem for the best footballer at the same time (1995).

Right now, Weah has won more than the Ballon d’ Or in his native Liberia as he has been elected the president.

He will become the first ever world footballer of the year to become president of a country.

Indications from Monrovia by external observers have said the polls were largely free and fair.

Former Nigeria President, Goodluck Jonathan, one of the observers of the Liberian run-off election told the BBC that though there were some challenges, he was sure the result would be fair to all contestants.

“The ballot box has replaced bullets and electoral disputes are settled through the courts,” he said of elections in the country that witnessed several years of civil war prior to 2005.

Whilst playing for Liberia in the throes of civil war, King George, as he is fondly called, single-handedly picked up the bills of the national football team and almost led them to the 2002 World Cup – they were beaten to the ticket by Nigeria by one point.

If he becomes president, he will be winning more than the ‘World Cup’.

Since joining the political terrain in 2005, Weah has been told he cannot win mainly because of a lack of education.

He has tried to diffuse that contempt with a Business Administration degree from the DeVry University in 2011 and for good measure added a Masters degree in Management from the Keller Graduate School of Management in 2013.

Weah, known for his close control and lung-bursting runs on the football pitch, said just as he played football naturally, he believes he has been called to help the Liberian people.

“I feel I have been called to service,” Weah told the BBC.

“I have come from slums, roaming around the streets of Monrovia [Liberia’s capital]. I made a mark.”

He told the Voice of America in 2011 that education alone should not be the caveat for leadership. “There are lots people that went into leadership and they don’t even have a college degree.

“But because people believe in them, they show good leadership skills. So, it’s left with the Liberian people [to determine] whether, because I have a college degree, I can be leader of that country.

“But, I know that I am a good leader, and I am waiting for the opportunity to one day lead that country,” Weah added.

Football can be a powerful political tool. If anyone cares to disagree then just point him or her in the direction of West Africa, particularly Liberia, where Weah has almost dribbled his way into government house.