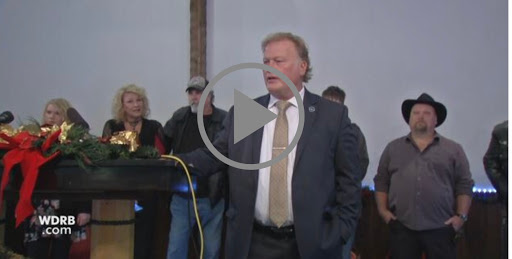 A Kentucky state representative accused of molesting a teenage girl has killed himself, according to WDRB.com in Louisville.

Rep. Dan Johnson, a Republican, reportedly shot and killed himself on a bridge in Mt. Washington, Ky. The gun was recovered by police, according to WDRB.

The Kentucky Center for Investigative Reporting published an expose on Monday detailing allegations that Johnson forced himself on a 17-year-old friend of his daughter after a New Year's Eve Party in 2012.

Johnson denied the allegations on Tuesday, according to the Louisville Courier-Journal. He said the accuser was a member of his church, and that the claims were, in part, politically motivated.

"This is an assault on all real people, there's no perfect people and you get into office and all of sudden political hacks come against you and start accusing you after you're in office," he said, according to the Courier-Journal.

Johnson also acknowledged that he messaged the woman on Facebook in January 2013, saying that he did not remember what happened the night of the alleged encounter and that he had been "drugged" at a local bar.

He said later on that he did remember what happened that night, and denied ever entering the room where the girls were sleeping.

After the allegations were reported on Monday, Johnson faced calls to resign from his state House seat.