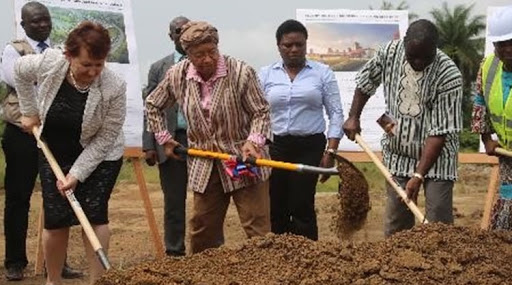 President Ellen Johnson Sirleaf has broken ground for a new and modern structure for the Redemption Hospital an Isolation Unit at the existing Redemption Hospital facility on Bushrod Island. The Liberian leader has also dedicated the newly constructed National Drug Service Warehouse in Kpelleh Town - Upper Caldwell outside Monrovia. She called on Liberians to take responsibility of their own development.

Responding to concerns by some Liberians as to why the project should start at such a time; with just few weeks to her administration - she noted that her outgoing leadership would be holding successive governments accountable and responsible to finish projects that are not yet completed.

She cautioned whoever the successor to complete critical projects under their administrations in a service to the Liberian people following the run-off election. The African first elected female president challenged the next administration to responsibly take very good care of the things happening on the watch of this leadership.

President Sirleaf said throughout her 12 years tenure, as she travelled around the country; one of the things that medical workers have always complained about was the issue of lack of drugs at the various medical centers.

President Sirleaf stressed that these concerns have always been raised by nurses, doctors and physician assistants, including ordinary citizens who are expected to benefit from the Health Centers themselves.

She commended Liberia’s partners who have been involved with the construction of the National Drug Service Warehouse – named and styled the “Central Medical Store” for putting their hands on desk, which resulted in the completion of the facility.

She praised authorities of the Ministry of Heath, Minister, Bernice Dahn, Senator Peter Coleman, Chairperson on Health at the Liberian Senate, and others for the achievements in carrying out the construction of the facility. President Sirleaf maintained that the maintenance of these facilities will be one of the major tasks of maintaining the facility.

In remark, Dr. Bernice Dahn, Minister of Health disclosed that the total cost of the project is approximately $5 million United States Dollars. She added that the Government of Liberia is providing $1.2 million United States Dollars. The Minister of Health revealed that Phase 1 of the “New Redemption Hospital will comprise of 155 in-patient beds with focus on paediatrics care and women health care services.

Minister Dahn said Phase-II will comprise of 159 in-patient beds and will include additional specialized services. The New Redemption Hospital will help the Ministry of Health to deliver comprehensive services to the growing population and avert future epidemics.

The Minister of Health expressed commendation to President Sirleaf and Liberia’s partners in helping to sponsor the healthcare delivery system of the country. Dr. Dahn said the new hospital will serve as regional referral hospital for Bomi, Gbapolu, and Cape Mount counties.