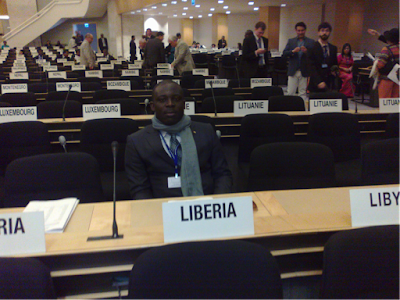 The Executive Mansion has confirmed the dismissal of the Labor Minister, Neto Lighe.
He was dismissed for his alleged continued, “gross disrespect and participation in wicked attack and false accusations levied against presidency,” the Executive Mansion stated in a release.
He was appointed to the position in 2014.
Lighe has been a staunch member the ruling Unity Party is also a senior member of Vice President Joseph Boakai’s campaign team.
Just minutes after his dismissal was confirmed, Mr. Lighe posted on his Facebook wall: “7 years ago, through a presidential appointment, I entered mainstream government as an Assistant Minister at the Ministry of Internal Affairs. 2 years later, I was promoted to the position of Deputy Minister and then Minister of Labour.”
“There's no singular honor than serving your country and I'm proud of the opportunity extended me to serve my country. Today, 7 years after, my service in government has come to an end.
“I want to use this occasion, on behalf of my family, extend my profound thanks and appreciation to Madam Ellen Johnson-Sirleaf for the opportunity extended me. To all my colleagues in government and employees at the Ministry of Labour, thanks for your cooperation and service during my stay. It is now time to move on.”